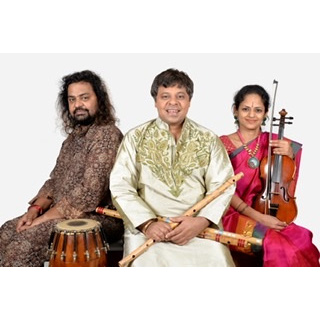 Shashank Subramanyam is a Grammy-nominated renowned exponent of the Bamboo Flute from India and specialises in Indian Classical Music. He was a child prodigy and began performing from his age of 6 in 1984 and has performed in the top concert circuit for over three decades. He is the youngest recipient of the prestigious Sangeet Natak Akademi’s senior award by Govt. of India, an honour bestowed by the Hon. President of India for the year 2017.

Early Life
Shashank Subramanyam was born in Rudrapatna, India, to Hemalatha and Prof. Subramanyam. His forefathers belong to Tirunelveli dist of Tamil Nadu. He was trained in Carnatic Music by his father Subramanyam and by doyen Vocalist Palghat K.V. Narayanaswami. He also underwent training in Hindustani music under Pandit Jasraj. Shashank is married to Shirisha, a Bharatanatyam Dancer. He had no Gurus for Flute playing and was mostly self taught. Shashank and Shirisha have a daughter Swara and son Samvit and live in Chennai, India.

Performance Career
Shashank performed for the general public in 1984 for the first time at the age of 6. Shashank began performing at the top circuit in 1990 with major performances in Adelaide, Australia, Kuala Lumpur, Malaysia and in Singapore followed by his major performance at Shastri hall in Dec 1990. His career-defining moment came when the Music Academy invited Shashank, just 12 years old, to perform in the senior most performance slot “SADAS concert” at The Music Academy, Chennai 1 January 1991.

Shashank performs in a wide range of concert environments from the pure Indian classical, Symphonies, Jazz, Films and crossover projects. He has led many ensembles and also has been a guest artist on many famed bands like Remember Shakti, New Jungle Orchestra, Blue Lotus, Shashank Meets Lelo Nika Trio, etc.