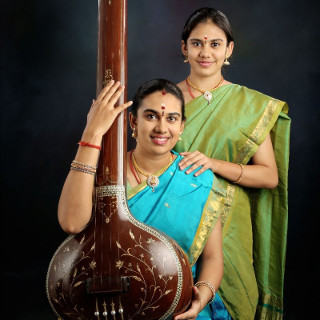 As a seven-year-old, M S Subbulakshmi’s great-granddaughter Aishwarya Shrinivasan or her at their home and the Carnatic music legend’s response was — “You will carry forward my legacy”.
While Subbulakshmi died 13 years ago at the age of 88, the love for classical music has endured, down to her third generation.

Aishwarya, now 21, is a rising singer, who has made over 200 public performances in India and abroad.
The country is currently celebrating the centenary of the music stalwart and a grand exhibition on the unmatched legacy of ‘MS’, as she was fondly known, was recently inaugurated.

Aishwarya and her sister Saundarya (12), who were present during the function, performed her song ‘Enta matramuna evvaru talachina’, as a tribute to their great-grandmother.

“It is a matter of great privilege and immense joy to call ourselves as the great-granddaughters of globally celebrated M S Subbulakshmi, but it also means extra responsibility to preserve and propagate the cultural heritage she has bequeathed to us,” said Aishwarya, who is pursuing a BA degree.

And, in the age of globalisation and remixed songs, both sisters are determined to carry on the musical legacy of MS, hailed as the ‘nightingale of Carnatic music’.

The nearly two-week-long exhibition titled ‘Kurai Ondrum Illai’, borrows its name from one of her famous songs, and portrays her journey from her birth in Madurai to becoming a globally celebrated musician, who earned awards and accolades in equal measure.

Recalling her personality, Aishwarya said, “She (Subbulakshmi) was a very soft-spoken person. When I played around in the house, she would get scared that I would fall on the ground and injure myself. And, would always ask me to sit beside her or in her lap.”

“When I was seven, she once asked me to sing for her and after I had performed, she paused, gave a smile and told me that I would carry forward her legacy. Since then, I have striven to achieve the heights in the field my great-gramdma excelled in. This is how, she will live on,” she said .

When asked about her career, Aishwarya said she has made “around 250 public performances, in India and the US and Europe” and more performances are scheduled later this year.

Vice President M Venkaiah Naidu, on the day of inauguration of the exhibition last week, had described Subbulakshmi as an “unsurpassed phenomenon” in the field.

“It is our bounden duty to preserve our culture for the next generation, and the life and legacy of MS should inspire the youth to pursue greater heights. Her legacy should be celebrated not just for year-long but for lifelong,” he said.

Subbulakshmi had many firsts to her credit, from being the first musician to be awarded the Bharat Ratna to winning the Ramon Magsaysay Award, and performing at the UN General Assembly.

The exhibition hosted at the Indira Gandhi National Centre for the Arts (IGNCA) will end on September 30 after which it will travel to a few other cities.

“After Delhi, it will travel to Chennai, and later to Bengaluru, Kolkata and Vadodara. The schedule for the last three cities are yet to be worked out. At the end of this exhibition a monograph on MS would also be published,” IGNCA’s Member Secretary Sachchidanand Joshi said.